Recently a blast from the past came across the workbench… the venerable (Sears) Silvertone Twin Twelve.  This was the classic 2 x 12 two-channel amplifier that occupied young musician’s Christmas lists for many many years.  I myself had one of these when I was about 15 – I liked the volume, (30 watts) and the tone was OK, but there was one weak point that all would agree on – the reverb was poor at best.  Built to a minimalist standard, the chassis is rather thin bent aluminum and the layout congested and tight.  These were not deep amplifiers – maybe 5  or 6 inches deep, and perhaps 26 inches wide.

Slim it had to be, because this head unit was transported tucked away under the speakers in the back of the speaker cabinet, held in by questionable plastic clips.  The cabinets apparently varied a bit – mine was covered with a thin grey textured and speckled tolex, but the one I am looking at here appears to be a thin black masonite or formica-type finish material, which is lightly beveled around the edges. 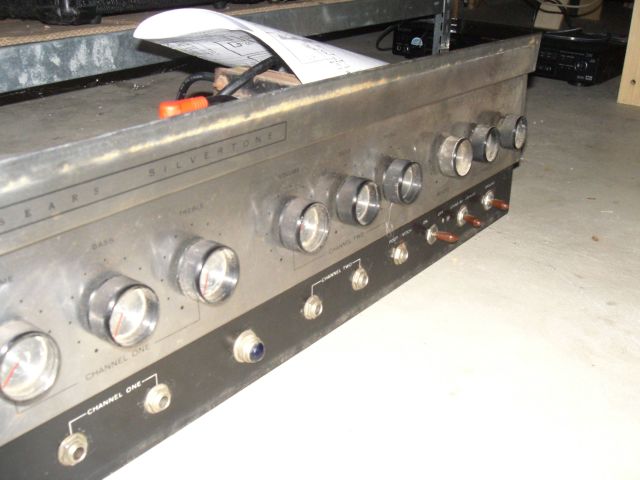 As usual, the complaint was noise and poor reverb performance.  I noted that when channel two (the reverb channel) was turned up and the reverb acutated, a loud hum could be heard and some squealing feedback.  I assumed at that point that the power supply filters had likely gone bad, resulting in some signal getting from one point in the circuit to another unintended part of the circuit -resulting in feedback.  Explaining to the owner that some caps were probably in order, I set it aside and worked on the amps that had come in before it.

A while later I got into the SIlvertone, and noted that some of the big caps had been replaced, though not all.  No surprise, I set about testing what was there and re-capped all the other electrolytics in the amp, noting that a few measured  weak (high dissipation value).

After the re-cap, a power up test brought the result that the amp made full power (about 30 watts over 8 ohms, 1kHz), but activating the reverb only brought more guitar signal and significant hum in to the sound. No cheesy reverb, just more guitar.  Examining the schematic,  it became apparent that some guitar signal was present on the reverb recovery tube’s grid, much more than I would think, and it was not delayed , just plain guitar signal and some hum on the oscilloscope screen.  Odd.  So I powered everything down and set about measuring the input and output impedances. Sure enough, the AC and DC resistances were way off… Most importantly, there were only 75 ohms DC between the input and output transducers.

As a kid, I had tinkered with the reverb tank in my TwinTwelve (of course – because it sucked!!) and I remember that the piezo transducers had been slipped between the spring windings – they had some kind of  odd insulating coating over them that turned to dust as I touched it.   While I did not take the tank apart on this unit, I think I can safely say something similar has happened here.  The 75 ohm connection was a virtual short between input and output, resulting  in raw guitar signal being present in the reverb recovery circuit.  The hum was perhaps due the loss of controlled grounding by the signal short.  Either way, the tank had to be repaired or replaced.  Good luck finding a replacement for one of these, I have never seen one on offer anywhere.  And beyond that, why would anyone want to repair a circuit that simply sounded so BAD? Simple solution? A nice new Accutronics 9-inch tank and a fender-style reverb drive circuit.

Looking at the tube compliment and consulting the RCA tube application book, it appeared that the existing tube could provide enough drive current if parallel-plated like Fender did, so after consulting with the owner and getting the green light (“treat it like it was your own amp” – I like it when customers say that….), I set about installation of a whole new tank and drive circuit. The only difference is the length of the tank – a full size 17” unit won’t fit in the Silvertone, so a three-spring Mesa-type would have to work.  Not my favorite tank, but far better than the stock unit.  In order to keep things reasonable, I decided to try to keep the recovery circuit the same, and re-wire the drive first. If that worked, I would save a lot of time and cost.  (The recovery circuit is a plate mixer, nothing like the Fender standard, but does have a single triode gain stage).  One aspect of that is that the recovery circuit is full-bandwidth – so potentially noisy.  For that matter, the reverb send signal in a stock Silvertone is pretty wide-banded, and this is generally a problem with spring reverb tanks – they like enhanced highs to be fed into them, and less mids and low frequencies in order to deliver a more room-like natural reverb tone.   Another concern was that the Silvertone circuit attenuates the input circuit to determine reverb level. This means the recovery circuit is always present and adding noise. Not the best situation, but I decided to try it first before I condemned it.

The biggest issue in doing this kind of redesign is packaging – how to get 3 lbs of crap into a 1 lb bag. The tank ended up being not the trouble I expected, physically, it was small enough to fit on edge into the space of the original tank, and using simple aluminum standoffs with tapped threads , I only had to drill holes in the new tank on the side panel to make it fit.  By measuring the original mounting holes of the Silvertone’s tank, I was able to install the new tank without altering the chassis from original – meaning that the amp could theoretically be put back to stock – although it’s far from likely to ever happen. Nonetheless, I like to use the less intrusive approach whenever possible. Using decent quality 90* RCA cables bought for the purpose, the wiring was pretty simple and overall space was not an issue. 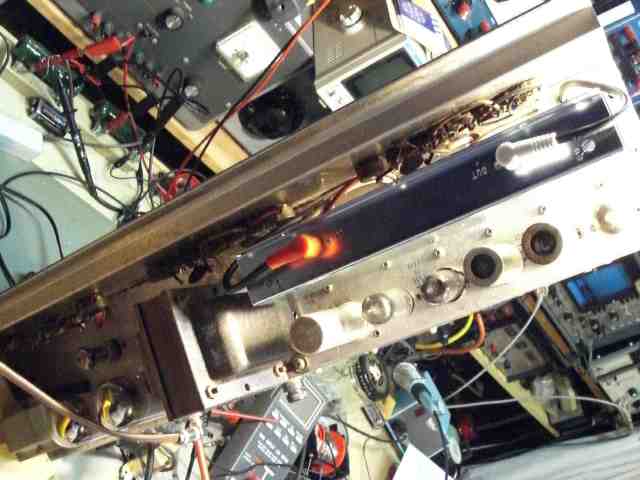 What I WAS concerned about was the magnetic field of the power transformer being so close to the tank. For that reason I made sure to put the input side of the tank towards the power transformer, and the open side of the tank facing away from it as well.  The input side of the tank is low-impedance – about 5 to 30 ohms on the unit I chose, so hum pickup would be less likely. A low-impedance coil is naturally harder to induce a voltage into than one in a high-impedance circuit (audio-wise).  Once the physical tank was in, I stripped out the original circuit around the drive tube and rewired it to the Fender stock values. I then jumped in the driver transformer  to see if the recovery circuit was going to work or not.  Lo and behold, reverb levels were good – a strong level, but hum was an issue.  Big issue.  My instant thought was that the power transformer was too close and still inducing hum…believable since it was only an inch away – but unplugging the tank cables made no difference.  I double-checked the wiring – and found no errors. 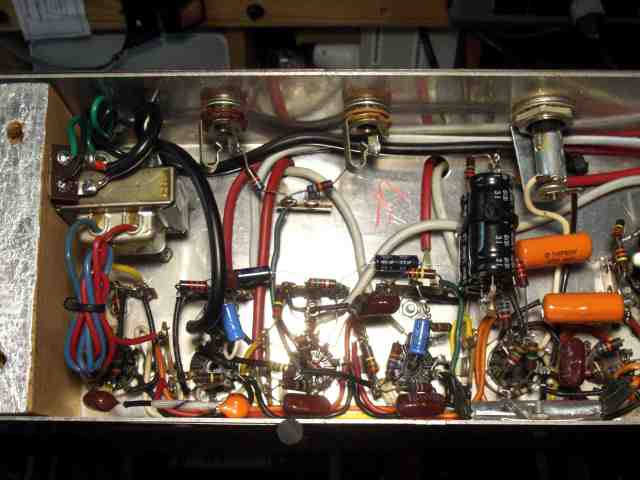 All of this started to come together, to make sense in my mind– I had noticed an extra 80 uF cap across the drive tube’s plate supply – definitely not original – I had removed it when I re-capped the amp to stock. Perhaps something was not right and the extra capacitance was needed in this amp?  I jumped in a couple of new large HV caps to the drive tube’s plate supply and viola!  No Difference.  OK…what now?  Using my oscilloscope, I started to collect ripple voltages across the power supply sections. Everything seemed too high, but the power stage was not humming at all.  (And well it shouldn’t – I had re-capped it after all..)

It was just the lower audio stages.  When I looked at the phase inverter (PI) ripple voltages, they were way out of balance.  In a balanced circuit like this, equal voltages of hum will cancel out in the push-pull output stage.  Not the case here. Since the plates of the phase inverter are not of equal voltages or impedances by design, this seemed like an imbalance that would not be cured without getting the ripple down to a level that the difference between the 2 PI plates would be next to zero.  I tried more filtering here, but that didn’t get the ripple down low enough.  Obviously I had missed something.  I went back over the power supply  with the scope and then it hit me.  I had noticed that the choke in the power supply was not original – one of the screw hole s was empty and a new one had been sloppily added to account for a different size choke than stock.  I unsoldered one of the choke leads and found… (drumroll please) ….only 35 mH.  Most amps use 4-10 Henries of inductance in the power supply.  The choke’s job is to present a high impedance to AC but let the DC trickle though unhindered.  35mH might be a lot at 400 MHz, but it’s nothing at 60 Hz. Obviously the choke was shorted internally, or just plain wrong from the get-go. 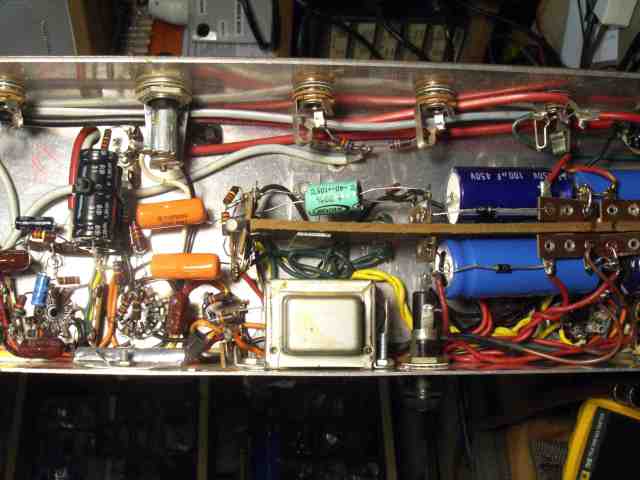 Jumping in a Fender-type (Deluxe/Vibro) 50-ma 6-Henry choke proved the trick. Clean power, no hum anywhere and the extra capacitance someone had added was certainly not needed any longer.  As it happens, the Fender choke has the same mounting pattern, so the original holes were a perfect fit.  I only had to lengthen the leads a bit to reach the proper points where it ties into the circuit

All in all this worked out  pretty well – the tank fits in, the drive levels and recovery levels are good, inducted hum is not an issue with the new tank so close to the power transformer, and the new reverb drive transformer fits nicely on the wooden side block of the amp (see pics). 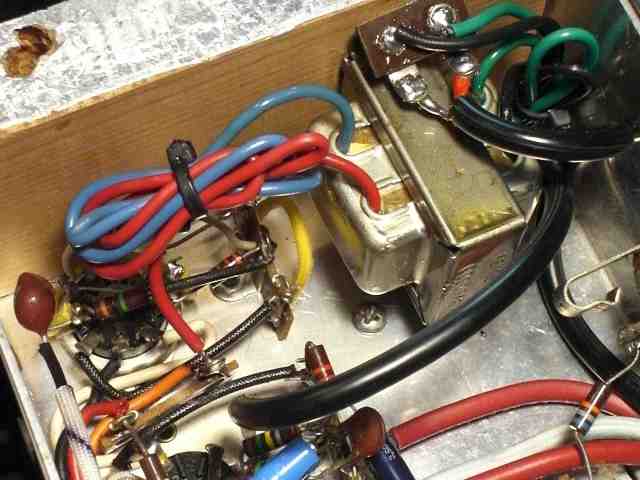 The only issue now is the reverb tone.  The original cap passing guitar signal to the reverb drive was too large – I placed a much smaller cap in series to knock out the lower frequencies somewhat. It could probably be smaller still, but I am still undecided on that. Further play-testing will be required.  Still, this was a nice modification.  The reverb sounds better than stock – not as nice as a 17” tank, but still usable. And the amp is quiet and stable.  The only remaining noise I measure at the output of the amp is due to the ungrounded input jacks (why on earth didn’t they ground the unused inputs?  To save  50 cents?)  and that is avoided by keeping the unused channel turned all the way down.  Outside of that the amp is quiet aside from the normal slight hiss a tube amp makes – and that’s so low as to be unnoticeable.  I think this amp is ready for the next 30 years of enjoyment – with a little bit of Fender  in there to help it along!