Here is an impulse purchase I made while living abroad in 2006.  I saw it on Ebay and just liked the form of the radio.  It was in France but it was cross-posted to the German Ebay site.  This French-made radio was clearly inspired by the then-still-new rage of television, carrying the CRT shape not only in it’s grill design, but in its cabinet shape as well.  Notable is the slide-rule scale and its integration over the speaker, making for a pretty sleek form for 1955.  Kind of reminds me today how everything needs to look like a cell phone or an iPod.  I wonder if folks in France in 1955 were as tired of that kind of thinking as I and some others are now?  Probably not, as consumer electronics were more expensive then and not so pervasive in daily life. But, I digress.  The radio dial didn’t move right when the it arrived, and once I got the chassis out it was clear why –  the next picture shows the warped speaker baffle made of 5mm masonite. It was clear this had to be repaired or replaced. Apparently the long-term tension of the dial string arrangement was to blame.

I cleaned the chassis and disassembled the whole front of the radio.  This facilitated a better cleaning of the slide-rule dial and illumination setup at the same time.  The illumination is particularly neat, and when I saw how it was arranged, I immediately was very glad I bid on the radio, even though I had paid around 85 Euros for it (then about 95 dollars), more than I typically like to drop on a bakelite radio. The illumination can, in my opinion, make or break a radio, and I particularly dislike asymmetrical lighting that you sometimes see when a single lamp is used, mounted off to one side or the other.  The Radialva has shielded side sockets designed to “light-pipe” the light across the scale from the left and right sides. A plastic shuttle rides behind the scale on invisible wires and also gets illuminated.  The fancy metal socketry keeps light leak to a minimum, to hightenthe effect. Now back to that pesky warped baffle…  I removed the old part and was planning on using it for a template to cut a new one or attempting to flatten it somehow.  Once apart from the rigid speaker, it was clear that the material was way too flexible to be permanently flattened, and worse, the grill cloth had been glued to the baffle very well.  The glue survived better than the cloth, which kind of fell apart when disturbed.  Another surprise was waiting behind the baffle.  Looking at the back side of the grill cloth, I realized that the color of the cloth had seriously faded from the visible part of the front, but not  at all in the back.  This turned out well, as I now had a working sample of what I needed to find to put on the new baffle I was going to have to cut, a good sample of the color as well as the weave and texture. Using some 6mm multiplex birch plywood from the local DIY market, I used a scrolling saw to cut a perfect replica of the baffle.

I was a little concerned about that extra 1mm or so of thickness,  but it appeared the mounting hardware had enough tolerance to it to prevent it being a problem.  Working for a major automotive supplier that makes interior components for cars as well as the electronics I was involved in meant I had some connections when it came to strange textiles.  I worked with our textile specialist who had literally thousands of textile sample books. Eventually we found an older sample that was for all practical purposes nearly identical in color and texture, although the weave was a slghtly different. She was kind enough to donate a piece of the cloth just large enough to cover the new baffle.  That found, the baffle was painted, and the cloth glued on much like the original, and the baffle was re-mounted to the chassis. 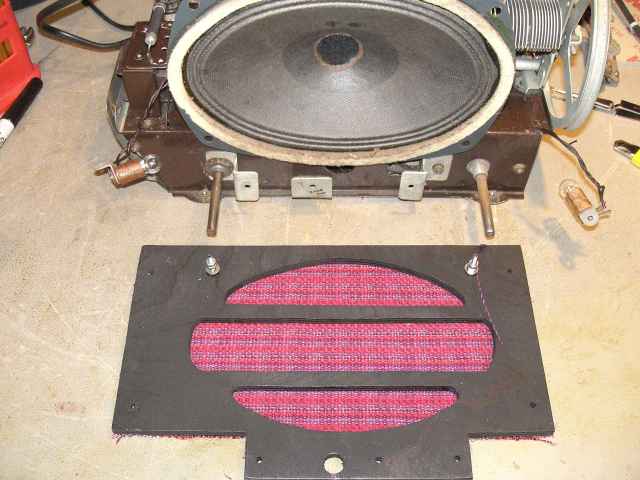 As for the electronics.  … I get in this museum- mode sometimes where I feel it’s my duty to make sure a radio will survive functionally for another 50 years.  So, all new caps were installed, and an alignment performed after that.  Along the way, a full chassis cleaning was in order, as well as lubricating the rotating parts, cleaning the pots and switches, etc. 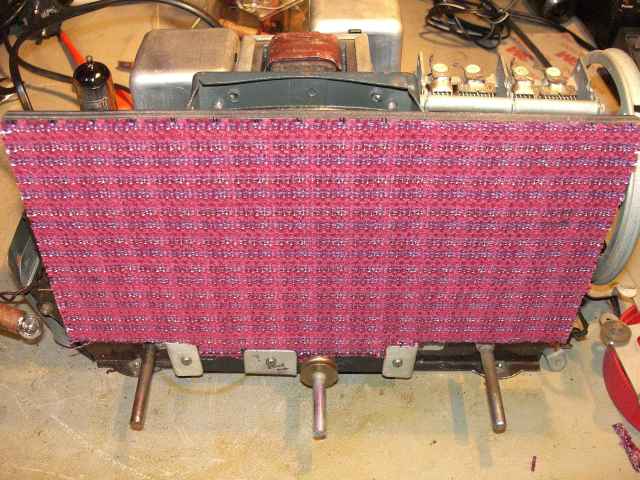 Next is the final underside of the radio with new caps everywhere.  (To be honest I have presented the restoration a bit out of order, as I usually do the electronics first to make sure everything works before spending a ton of time on the non-electronic details.  The watchful eye might have noticed the old baffle-board is still in place here! – Dan)

The lamps were both replaced.  A mild RF alignment was necessary after all the caps were replaced, to peak things out.  This radio has 4 bands, Longwave, Medium Wave (our AM-band), Shortwave 1 and Shortwave 2. The radio is also set up for 220v/120v operation, but I really wonder how many of these radios ever hit the American market.  You can see in the above picture a little brown socket cap to the near right with a tiny grip on it, and if you look closely, you’ll see the red 220  printed on the side facing the camera. One simply removes the socket plug and rotate it 180 degrees to change the mains voltage setting.  Also note the chassis was painted glossy brown, and the mounting points to the cabinet were set with brass threaded inserts. I don’t think this was a low-end radio… too much expense was taken on the hardware side…or perhaps they did it all for style and reputation, as Europeans sometimes do. I miss that kind of thinking in some American products. We’ve forgotten all about that here in the last 40 years as cost-driven mass consumerism has become the do-all end-all in most every market we participate in. 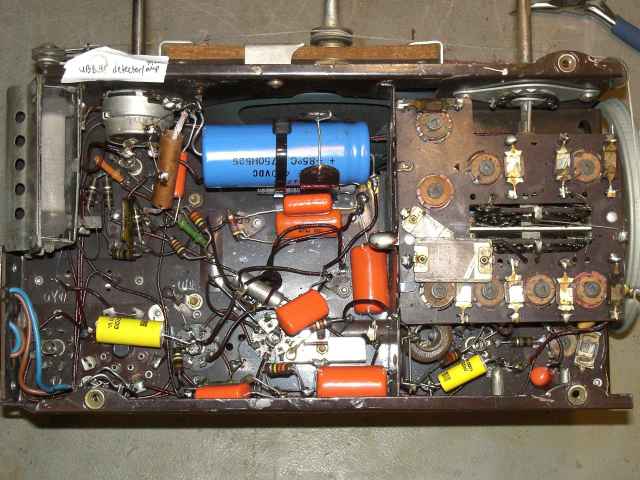 And how does it all look once back together and the cabinet cleaned up? Pretty good, I’d say.  This was an excellent candidate for a restoration, as it was really all there and complete. The bakelite cabinet was in good order, needing only polished and detailed. Even the brown wool knob washers were mostly there, with just a few holes from the munchings of carpet beetle larvae to be seen. The scale had a bit of graphic print rubbed off from the warped baffle situation…the marker shuttle was hitting the back of the scale as it moved, but the damage there was light and the city names are still readable.  All in all I like this radio a lot, it’s performance is decent for what it is, and the dial looks great all lit up.